The magistrate of Jessore is ordered to withdraw and apologize.

During the campaign, Executive Magistrate and Assistant Commissioner of Jessore Saima Hassan raped three elderly men and older men for not using masks. He does this by making pictures and videos of this inhuman act. Somehow, the image was spread on social media, and a storm of criticism and criticism came against Saima Hassan. The general public is enraged for this inhuman act. Saima Hassan was withdrawn on Saturday morning for insulting and abusing these elderly citizens.

It is learned that after the withdrawal of Saima Hassan, he was added to the office of the Divisional Commissioner. Even after opening the office, investigators have been told to take action against him. At the same time, UNO has been instructed to go to the homes of abused elderly people to apologize.

Read the details below …

The magistrate of Jessore is ordered to withdraw and apologize 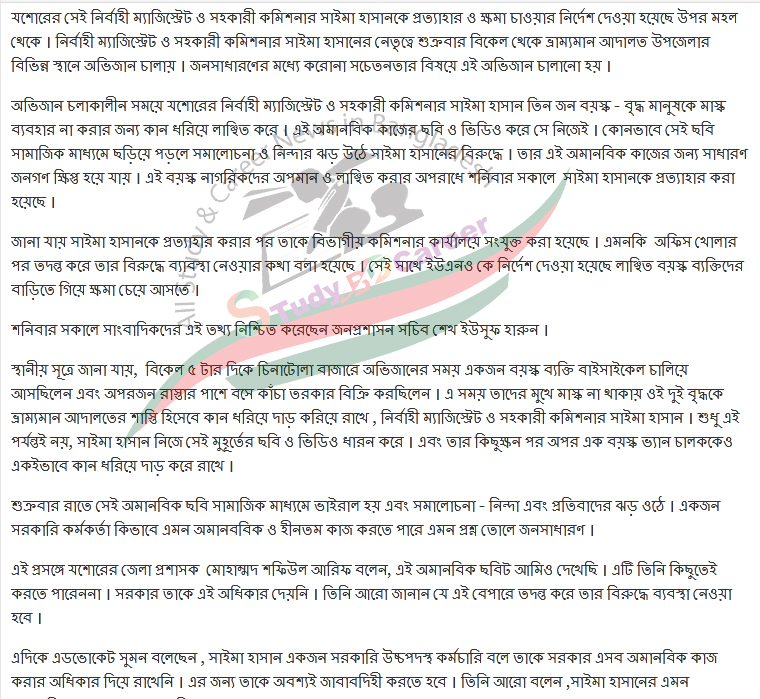 According to local sources, during the raid in Chinatola Bazar around 05pm, an elderly man was riding his bicycle while another was selling raw vegetables sitting on the road. At the time, they did not have a mask in front of them, and they kept their ears open for the punishment of the traveling court, said Executive Magistrate and Assistant Commissioner Saima Hassan. Not only this, Saima Hassan himself captures photos and videos of the moment. And shortly thereafter another elderly van beats the driver in the same way.

On Friday night, the inhuman image went viral through social media and became a storm of criticism, condemnation and protest. The public raises the question of how a government official can do such inhuman and degrading things.

In this regard, Mohammad Shafiul Arif, deputy commissioner of Jessore, said, “I have also seen this inhuman image. He couldn’t do it at all. The government did not give him this right. He also informed that investigation will be taken against him.

Advocate Sumon, meanwhile, said that Saima Hassan, a high-ranking civil servant, did not give him the right to do these inhuman acts. For this, he must be held accountable. He also said that Sumon would sue Saima Hassan for such inhumane acts.

No government official can do such degrading and slanderous assassination of 3 elderly people without earning a mask. Instead, the responsible administration should be aware of the public in love. The use of a government official needs to be gentle, polite, gentle and touching. Only then will people of all levels adhere to every directive they love.